Torchy Tacos....If I am not mistaken, it originated from Austin, TX. That's what eventually got me to try this place. Torchylocation took over Crostini's location. I loved Crostini, even though I don't think anyone every paid any attention to it. The chef/owner was Vietnamese and had such an exquisite menu. I think it was just bad marketing because he knew how to cook. Anyways, back to Torchy Tacos.

Was hungry and ready to eat. Prices are a bit high for a taco. It's between $3.25 to $4.00 for one taco. You will definitely need at least two tacos. In my case, I stopped with one. Not because it wasn't good...It was too good! I was afraid I was going to eat six tacos, so I literally had to eat one taco and get the hell out of dodge. If you don't mind paying the price for a average size taco, you will be pleasantly delighted with the mix-match flavors. The diablo hot sauce was awesome! I ordered a Dirty Sanchez Taco (because of the name) which consist of eggs ,carrots, and a fried pablano pepper. SO good! Doesn't sound good, but it was quite flavorful. I did ask for the diablo hot sauce instead of the ranch sauce it normally comes with. 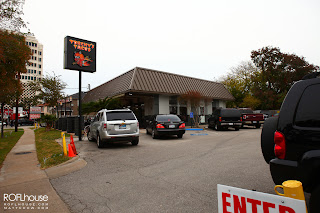 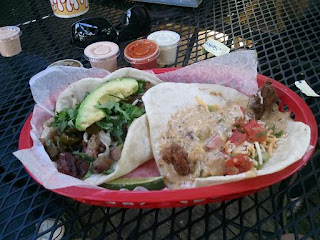 The atmosphere is very casual and I sat out on the deck. Give it a try, if you don't mind the price. For a true meal, you will spend around $20.00 a person. Even though it was good, I felt like it was still missing something....Perhaps Austinites?
Posted by Click, Click, Caption This.... at Wednesday, May 02, 2012